In the latest episode of The Walking Dead, Alexandria loses another resident.

Before I get started, please note that there is a major spoiler in this post.  If you haven’t watched the episode and don’t want me to ruin it for you, STOP READING NOW.

Full disclosure, I knew it was coming, but not for Dr. Denise.  In the graphic novels, another character gets the arrow in the eye and I was shocked then, too.  I liked Dr. Denise.  I liked seeing her progress from a total chicken shit to a chicken shit ready to shed her chicken shit skin.  I liked seeing her with Tara (I can’t even imagine what she’s going to do when she finds out).  Most of all, I liked that the good doctor was scared, but went out there and tried to handle business anyway.  They live in a frightening world (not that this one doesn’t have its moments), but she fought that fear and kicked ass.  I’ll miss her.

Let’s go backwards.  The show begins with Olivia checking food supplies, Father Gabriel on guard duty (what a turnaround for him!), and of all people, Eugene is watching the perimeter along with Sasha.  Morgan is outside doing his daily practice while Carol sits on her porch swing smoking a cigarette and contemplating her mixed emotions.  Morgan has also been constructing a jail cell, which makes Rick wonder why.  He says it’s in case they want to make a different choice other than killing.  That would be wonderful if outsiders weren’t constantly trying to kill them.  The next day, the same thing happens.  But then the day after that, all is quiet.  See, they’ve been waiting for Heath and Tara to come back from their supply run and so far there’s been no sign of them.  Dr. Denise is worried and wants to do something.  So she tells Daryl and Rosita about an apothecary she remembered seeing.  They agree to check it out but she wants to join them.  She’s met with resistance but eventually they agree to let her come along.

Meanwhile, Eugene and Abraham go out on a run of their own, but Big Red isn’t sure what they’re looking for.  Eventually, they find a building containing a metal works and Eugene reveals that he would like to start making bullets for the camp.  Abraham thinks it’s an outstanding idea, but the pair are interrupted by a walker.  Eugene wants to kill it himself and tries his best, but Abraham steps in and does it for him.  Instead of thanks, Red is met with righteous indignation.  Eugene tells him that he is fully capable of killing a walker without his interference and Red tells him he’s basically full of crap.  Then Eugene gets nasty and says that Abraham is no longer useful to him.  Ouch!  Who wants to feel like they’re no longer useful?  So Abraham takes his useless ass and leaves Eugene to fend for himself.

Daryl, Rosita and Dr. Denise arrive at the apothecary.  The outside of the building had handprints all over it, so only God knows what happened there.  Daryl and Rosita tell Dr. Denise to stay outside, but she wants to help so they let her come in.  They check the place for walkers and eventually find the pharmacy.  It’s locked but Daryl gets the gate open with no problem.  Apparently, the place hasn’t been touched since the apocalypse and they start filling their bags with medicine.  Daryl and Rosita hear something but determine it’s just one walker.  Since it can’t seem to get out, they let it go and keep on with their task.  Of course, Dr. Denise decides that would be a great time to show her mettle.  She walks into the room and sees an emaciated walker on the floor.  The room contains a playpen, which makes me nauseous because if there was a kid in there, he or she is no longer alive.  Dr. Denise sees the word “Hush” written several times on a wall in blood and bolts out of there.  She goes outside and tries to keep it together.  Daryl and Rosita, done with their task, come out and try to calm her down in their own way before heading back to camp.  On the way back, Dr. Denise finds a car containing a cooler that may have something they need.  Daryl tells her to leave it, but she tries to get the cooler anyway.  She ends up with a walker on top of her, ready to bite her face.  She gets on top of it, stabs the walker in the head and then promptly throws up.  Inside the cooler is a can of orange soda she triumphantly takes for Tara.  Daryl and Rosita are pissed that she took a chance like that, but Dr. Denise explains why she did it.  She didn’t want to be afraid anymore and going on the supply run was her way of overcoming that fear.  Before she could finish her speech, she gets the arrow to the eye and here we are. 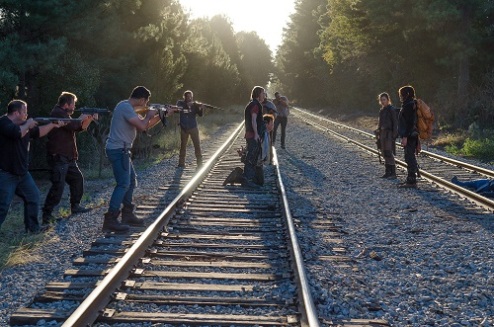 What made things worse was that the person who put the arrow in her eye was the same scumbag who stole Daryl’s bike a few episodes back and the arrow currently in Dr. Denise’s head is from Daryl’s crossbow!  Dwight (played by Austin Amelio) is a Savior now but from the looks of him, he hasn’t had it quite so easy.  He’s got Eugene as a hostage and tells Daryl that they either let the Saviors into Alexandria so they can take whatever and whomever they want, or they all die.  Eugene sees Abraham hiding behind some oil cans and tells Dwight to kill him instead.  What?  Has Eugene gone back to being a fraidy cat?  Nope, that was his way of creating a diversion, of which he takes full advantage.  By biting Dwight in the crotch.  Like, he had the man’s gonads in a vice lock.  Abraham starts shooting and all hell breaks loose.  Daryl and Rosita grab their guns and start taking the Saviors out one by one.  Dwight is finally able to break free and he tells the remaining men to fall back.  Daryl wants to go after him, but Eugene has been shot and they need to get back to camp.

Back in Alexandria, Eugene survives his wound and Abraham apologizes to him for thinking he wasn’t capable of handling himself.  Afterwards, Big Red visits Sasha and asks in his roundabout way for her to make a choice.  She chooses him and asks Red to come inside.  Elsewhere, Daryl and Carol bury Dr. Denise in the makeshift cemetery that is quickly starting to fun of room.  Later, Tobin finds a letter from Carol explaining why she had to leave Alexandria.  Morgan looks at her empty porch swing for a long moment, which makes me wonder what he plans to do next.

We’ve seen the Saviors several times so far, but where oh where is Negan?  The Saviors are highly trained and vicious and completely loyal to Negan.  He is one scary dude and we still haven’t seen him yet.  I swear, if AMC waits until the season finale to finally introduce him, I’m going to be pissed.  But I’ll still watch.

The Walking Dead airs on Sundays at 9 p.m. on AMC.