In this episode of The Walking Dead, Daryl gets the short end of the stick in the worst way.

After a well-deserved reprieve of the last episode from the craziness of the still-too-raw season premiere, we are back again amongst Negan and his Saviors.  The episode begins with that shithead Dwight doing what appears to be him stealing from members of the Sanctuary to make himself a sandwich, when he wasn’t watching episodes of “Who’s the Boss?”.  The Sanctuary doesn’t seem to be the kind of place that makes one feel safe, since one little thing can warrant a beat down.  Unfortunately for Daryl, he found out the unbelievably hard way what it’s like to be under Negan’s control.

When he wasn’t being jolted awake by the same song being played over and over again, Daryl was fed dog food sandwiches and locked in a room with barely any light, no toilet, no nothing.  Just the sound of that song playing again and again.  Daryl is finally taken out of that hole to see the resident doctor.  When he and Scarface get there, Scarface’s girlfriend is already in the room, with a negative pregnancy test next to her.  Whether she’s trying to get pregnant on purpose or because Negan said so is a question for another time.

After being checked out by the doc, Scarface takes Daryl outside to view the walkers, letting him know that Daryl can either be one of them or one of the Saviors.  But from what I’ve seen so far, being a walker might be better.  Back inside, Daryl and Dwight run into Negan, who you absolutely must kneel to no matter what you’re doing.  And I mean those people got on their knees like someone grabbed them by the shoulders and pushed them down.  Negan demands a moment of Dwight’s time, leaving Daryl, although under heavy guard, to survey his surroundings.  He notices a cozy room with a bed, kitchen, easy chair and a small library.  Scarface notices Daryl’s eyes wandering and gets him out of there.  He hauls him back to the hole and tells him to make it easy on himself.  Daryl being Daryl tells Dwight he “ain’t never gonna kneel.”  Dwight tells him that he said the same thing but he did anyway.  Daryl is like, “I know,” but Dwight is like, nah man, “you don’t.”  Then he closes the cell door and that damn song starts playing again.  Christ, make it stop!

Dwight and Negan have a little powwow about Daryl’s state of mind, with Dwight telling his boss that the breakdown will come soon.  Hearing good news, Negan offers his right-hand man a chance to get laid with “you know who,” which gives him pause.  Negan chalks the pause up to Dwight maybe having problems with the plumbing, but Dwight says he hasn’t earned it yet.  Negan doesn’t like that answer and feels like Dwight is basically telling him no.  But he’s saved by a call that comes in over the walkie talkie about a Sanctuary member who took some stuff and ran (dumb move).  Dwight offers to bring Negan’s “shit” back instead of having someone else do it.  Hell, any reason to get away from that place is a good one.

Instead of Dwight, Daryl’s dog food sandwich is brought by someone else, who makes the mistake of not locking the cell.  He turns the music back on (dammit!) and Daryl slowly opens the cell door (too easy).  He makes a run for the exit and barely misses being caught by a few Saviors (too easy still).  While hiding, he’s grabbed from behind by Dwight’s girlfriend who basically tells him to take his ass back to his cell while he still can.  Daryl doesn’t listen (of course), runs for the exit and is promptly surrounded by a circle of Saviors.  Negan joins the group and my heart basically rises into my throat.  He tells Daryl that he failed his little test and now has three choices, none of which are any good:  end up on a spike as a walker, earn points to get out of the cell, or be his bitch and work for him as a Savior.  Daryl picks Door No. 0 and Negan takes a swing at him with his girl Lucille.  But Daryl doesn’t flinch and Negan is intrigued (not good).  So, he’s got other plans for our boy Daryl.  In the meantime, how about a nice helping of whoop-ass?

On the road, Dwight isn’t having a great time either.  His bike is jacked up, there are walkers splayed out on the road and one falls from above.  Dwight avoids being splattered just in time, but falls right into the path of another walker ready to get a piece of him.  After he gets loose, Dwight’s pushing his bike on an empty road when he sees the runaway.  It’s the guy who runs the garden at the Sanctuary, the same one he was stealing from for his damn sandwich.  He’s fighting off a walker, but Dwight tackles him so he can take him back to Hell.  Dude is pleading with him to just kill him or let him go, but Dwight knows that won’t fly with Negan.  He’s terrified, so much so that Dwight threatens the runaway:  he’ll spike everyone he’s ever spoken to and dig up dude’s dead wife and feed her to the crows.  Dude caves and starts walking back, but tells Dwight that he knows there’s nothing left.  As he walks away, Dwight does the right thing and puts a bullet in the runaway.  Wait, am I supposed to start liking this guy now?

Back at the Sanctuary, Scarface’s girlfriend visits Daryl and tells him that his last words to her came true:  she has been sorry ever since she and Dwight came back to Negan.  God only knows what that means.  A bit later, Dwight returns and sees his girlfriend on the staircase smoking a cigarette.  He bums one and then they lie to each other.  The girlfriend lies when she says she is being treated well, and Dwight when he says he’s happy.  Later, Dwight brings Daryl his dog food sandwich, but he won’t eat it.  He throws it at Dwight instead, which could possibly make things even worse for him.  But Dwight let’s Daryl in on a secret:  Negan seems to like him, which could work to his advantage.  But Daryl is stubborn as ever and says nothing.  So, Dwight tapes a Polaroid on the wall next to him and then locks the cell door.  He starts playing a different song, this time a sad song about crying.  Daryl looks at the Polaroid, which is a photo of Glenn’s smashed head (NOOOOOOO!) and Daryl does break down and starts crying.  Dwight hears him weeping and slowly walks away.  The next morning, he opens the cell door and Daryl is asleep with the gruesome photo next to him.  For a moment, Dwight looks like he feels for the guy. 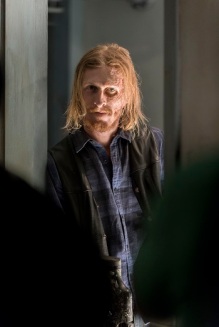 Dwight takes the prisoner to see Negan, who’s sitting in the very room Daryl was surveying a few days ago.  Negan starts going on about making Daryl one of them and then tells the story of how Dwight became his right-hand man.  Well turns out Dwight’s girlfriend is actually his wife, Sherry.  Well ex-wife.  Apparently, Dwight, Sherry and her sister Tina, who needed meds to survive, were working for points.  Negan offered to marry Tina and keep her flush with meds, but she said she would think about it.  That’s basically like telling the man no, so he wasn’t happy with that.  Before he could do some damage, Dwight, Sherry and Tina ran for the hills, which is when Daryl met them.  We all know how that ended but what we didn’t know was how Negan reacted when Dwight and Sherry came back.  Sherry offered to marry him in Tina’s place, but that still wasn’t enough for King Shit.  He gave Dwight “the iron,” which explains the hideous scar on his face (but not fully).  While Negan is telling this tale, Dwight is remembering all of this and looking at Negan like he wants to kill him.  Like seriously do some damage.  But like everyone else there, he’s terrified and does nothing.  After his storytelling, Negan asks Daryl who he is.  At first, he doesn’t answer, so Negan walks up real close, with Lucille in clear view, and asks him again:  “Who are you?”  After a long ass pause, our man gives Negan an answer:  “Daryl.”  Dwight tries to get him to change his answer, but Negan says nope, he made his choice even though it was dumb.  Daryl ends up in the cell again, determined to ride it out or die.  He tells Dwight that he understands why he took all of Negan’s shit, because he was thinking of Sherry.  But Daryl is thinking of someone else, most likely Glenn, and will not bend.

Dwight heads back outside, watching as the newest walker is dumped in the yard.  When the bucket is removed from the walker’s head, it turns out to be the runaway Dwight shot.  He looks at him for a bit, and then slowly goes back inside, wearing Daryl’s winged vest.

Will Dwight surprise us all and make a run for it?  Will Daryl finally break down and kneel?  And will we ever get that damn song out of our heads?

The Walking Dead airs Sundays at 9 p.m. on AMC.  Photos courtesy of AMC.