In the season premiere of Game of Thrones, Arya Stark became the MVP of Westeros, Lyanna Mormont put the men in their place and Dany came home.

Okay, I’ve had time to watch GOT a second time and my goodness!!  So much has happened and it’s only the first episode!  Let’s get to it, people.

HBO has really upped the “Previously On” portion of the show.  Normally, we get a hodgepodge of what happened the previous season.  No, not this time.  Instead, it was a strategically placed mini movie of what transpired last season and it was still just as shocking.  But it also reminded is that this season and the next (and sadly, the last) are all important in this great game of thrones.  House Lannister is fighting for its very existence, House Stark is slowly coming together and House Targaryen is coming to take everything from everyone.

At the start of the show, we are at the Twins, where a very much alive Walder Frey is having a feast for all the men of his house.  At first, I thought this was some kind of flashback.  But damn was I so wrong.  It was none other than Our Rebel Arya Stark, using the skills she learned as No One.  She poisoned every male member of House Frey, killing them all and ending that house for good, possibly.  Once it was done, she turned to one of the girls and said, “Tell them Winter came for House Frey.”  A girl’s list has become one name shorter.

In the North, Meera and Bran arrived at The Wall.  While waiting for the gate to open, Bran sees the Night King and the rest of the White Walkers (including the giant Wun Wun) are on the move in one of his visions.  They bring the storm that will envelope all of Westeros with them.  When the gate opens, a relieved Meera introduces them to the Night’s Watch, including the new Lord Commander.  He’s skeptical at first, but when Bran mentions Hardhome, Ed’s face says it all.  He commands his brothers to take Meera and Bran in before closing the gates against what’s to come.

At Winterfell, the King in the North Jon Snow is having a strategy meeting.  He wants dragon glass to be mined and forged into weapons against the White Walkers and he wants everyone ready to fight, including the girls.  Of course, Lord Glover has a problem with that.  But Lady Lyanna Mormont (the amazing Bella Ramsey) steps up and lets Glover know a few things.  “I don’t plan on knitting by the fire while men fight for me.  I might be small, Lord Glover, and I might be a girl.  But I am every bit as much a Northerner as you.”  Glover tried to cow to her but she interrupted him and said, “And I don’t need your permission to defend the North.”  That’s right you don’t!!!  She shut that fool down!  Lady Lyanna needs to be in every episode until the end of the series.

Now if only Lyanna could talk some sense into Jon.  The newly-crowned King is already being a butthead.  He decided to punish the houses that did not stand with House Stark against the Boltons by . . . giving them back their houses.  WHAAAATTT??  WTF, Jon?  The Umbers and Karstarks left you high and dry and now you want to say, “hey it’s alright that you betrayed my house and sided with a maniac.  It’s all good.”  COME ON!!  Sansa, who knows more about dealing with traitors and usurpers than Jon, tried to talk some sense into her brother, but to no avail.  He shut her down, which you know is going to be a problem later on down the line.  Afterwards, Jon and Sansa argue, with Jon basically telling his sister to stop giving him useful and smart information in front of other people.  “Joffrey never let anyone question him, do you think he was a good king?”  Like I said, Sansa knows what she’s talking about.  But will Jon listen?

Back at King’s Landing, the new Queen is contemplating her next move.  Jaime is a little spooked at what his sister/lover has accomplished while he was away.  She’s killed all of her enemies, blown the Sept of Baelor to the heavens and crowned herself Queen.  But she hasn’t talked about King Tommen’s death.  In case you’ve forgotten, Tommen jumped out of a window when he realized his mother killed his wife.  Cersei underestimated her son’s love for his wife and now feels betrayed by him.  With her actions being more and more brutal, it’s only logical that Jaime wonder if he’ll be next on his sister’s hit list.  But she has other plans. 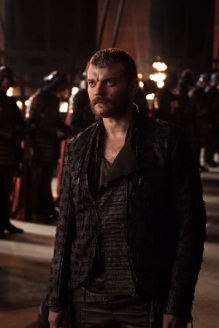 Euron Greyjoy came to King’s Landing to offer his ships and his “two good hands” to Cersei.  With Jaime standing right next to her.  But Cersei isn’t convinced.  “You killed your own brother.”  “You should try it. Feels wonderful.”  Okay, that was funny.  But Jaime didn’t think so.  Luckily, Cersei turned down Euron’s proposal but he doesn’t give up so easily.  He promised to bring her what she wants and lay it at her feet.  What could it be?

At the Citadel, Samwell is settling in nicely.  And by nicely, I mean he’s cleaning shit, serving food that looks like shit and doing basic library duties.  He looks miserable.  But he deals with it, because Sam wants something.  He wants to get into the forbidden section of the library.  But how to do it?  Well, he talks up one of the maesters to see if he can gain access.  Sam tells Archmaester Ebrose about the White Walkers.  In his roundabout way, the Archmaester tells Sam that he believes him, but doesn’t give him access to the forbidden section.  So, Sam takes things into his own hands and steals the keys from the maester who does have access.  Back in his quarters, he reads through the materials with Gilly and Little Sam beside him.  Gilly has learned to read and begins reading “Legends of the Long Night.”  Sam comes across a map of Dragonstone showing a mountain of dragon glass under the structure.  He begins composing a letter to Jon about this new revelation.  Will this lead to a Jon/Dany meet and greet? 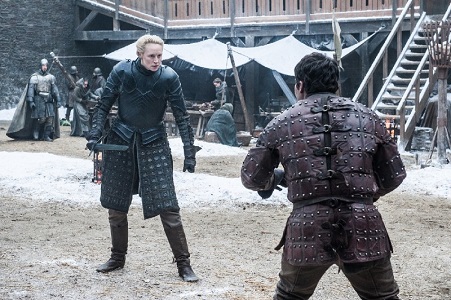 Back at Winterfell, Brienne is teaching Pod to help him with his sword skills.  She gets the best of him each time, but then here comes Tormund with his sly smile and that red hair.  He distracts Brienne for a moment, giving Pod a chance to best her.  She punches him in the gut for his trouble, with Tormund telling him, “You’re a lucky man.”  He smiles at Brienne, leaving her a little flustered (or pissed off, it’s hard to tell).  Sansa is watching the exchange when Littlefinger walks up behind her, whispering things.  If anything happens between Sansa and Jon, it won’t be Littlefinger who causes it.  He thinks he has sway over Sansa, and if we judge her by her past, he would be right.  But she’s been through hell and back and is with her family again.  Lord Baelish is in for a surprise if he thinks she’s the same girl she once was.

In the Riverlands, Arya comes across some Lannister soldiers, young boys all of them.  One just happened to be singer Ed Sheeran, which honestly felt a bit weird.  His part was small (thank God), but his presence felt fake, like he just didn’t belong.  Maybe it’s because no major players outside of the ones that have been with the show from the beginning have ever appeared.  Hopefully, he’ll be the last.  Anywho, the soldiers invite Arya to some of their rabbit, leaving her conflicted.  Normally, she would have slaughtered them all.  But they all just want to go home and be with their families.  They’re just like her.  They have no idea how lucky they are.

The Hound and the Brotherhood are on the move, as well.  Only, the snow and cold have made an appearance.  They look for shelter and come across a home that is all too familiar to Clegane.  It’s the same home where he Arya sought shelter before Clegane left the farmer and his young daughter to die.  He’s spooked at being there and is cranky the entire time.  Once inside, he sees the bodies of the two who died, unbeknownst to Beric Dondarrion and Thoros.  While Thoros builds a fire, Clegane asks Beric why the Lord of Light keeps bringing him back.  Beric has no idea, leaving The Hound with more questions than answers.  Thoros calls Clegane over to the fire and asks him what he sees.  At first, he sees nothing but “burning logs,” but when he looks again, he sees The Wall, East Watch by the Sea and the White Walkers marching.  Rattled by what he’s seen, Clegane buries the two bodies in the middle of the night.  He handles their bones gently and puts them each in the ground.  Thoros helps and is surprised after their done when Clegane says a prayer.

Back at the Citadel, Sam is collecting the empty bowls from the infirm when an arm covered in grey scale shoots out of one of the slots.  The arm belongs to none other than Jorah Mormont, and my friends, he ain’t lookin’ so good.  The grey scale has traveled over his entire arm but we don’t know if that is all.  Jorah’s face is in shadow so we don’t know the extent of the damage.  But he doesn’t care about that.  Jorah wants to know if Dany has come to Westeros.  Sam tells him that he hasn’t heard anything, shutting the slot on Jorah and his disease. 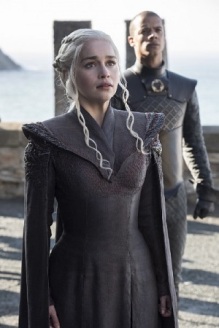 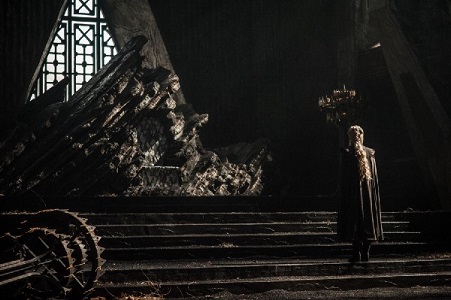 Well, to answer his question, yes, Dany has arrived in Westeros.  She is in a small rowboat with Tyrion, Missandei, Grey Worm and Varys.  As they come up to her family home, the dragons fly ahead, circling the castle, which sits high up on a hill.  Dany walks on Targaryen land, then kneels to touch the ground.  Two of her Unsullied open the front gates, and she sees her home for the first time.  The group walk up the path to the castle.  When they walk in, the first thing Dany sees is a Lannister banner.  She pulls it down to the floor, looking at it with disgust.  She walks over to the throne, which looks way more badass than the Iron Throne, to be honest.  Grey Worm tries to follow her, but Missandei pulls him back.  Dany must do this alone.  She looks at the throne, but walks by it.  The time is not right for her to sit upon the throne.  So, she walks into the war room where Stannis once stood, plotting his way to the Iron Throne and ultimately, his death.  Dany runs her hands along the carved table while Tyrion admires the stone dragons on the walls.  They both glance at each other before Dany finally utters the words we’ve all been waiting for: “Shall we begin?”  Yes!

How will this great war begin?  Who will make the first move?  And will any of them be strong enough to fight the Night King?

Game of Thrones airs Sundays at 9pm on HBO.  Photos courtesy of HBO.